January 04, 2022
Nero became emperor of the Roman empire in AD 54, aged 16, due to the machinations of his mother, who had married the previous emperor, Claudius, and then likely poisoned Claudius, hoping to rule the empire through Nero. Although Nero spent money freely during his first years of reign, some think this may have been a good thing, proving employment at a time when it was needed. However, as time passed he became increasingly erratic, more interested in the arts than in ruling. He eventually murdered his mother and other family members. In AD 64 a grteat fire swept through Rome, and many blamed Nero, as he used the opportunity to build more palaces on the now empty land. Nero used the Christians as a scape goat, and so begun the first persecution of Christians by Rome. After 14 years of rule, the senate declared him a public enemy, and Servius Sulpicius Galba led an army against Nero. Nero fled Rome, to a nearby villa where, after some vacillating, he killed himself. However, a legend aro
Post a Comment
Read more

November 30, 2021
A big topic in the evolution/creationism debate relates to the concept of so-called "Junk DNA". IDists pretend that they predicted junk DNA would have a function, and they pretend that evolution predicts it would not. Therefore, so they say, the recent findings that much of junk DNA has a function supports ID and refutes evolution. Spoiler alert: They are lying. What Is Junk DNA?​ Junk DNA refers to any DNA that does not code for proteins, of which there is a lot. It is also called non-coding DNA, which is perhaps a better term. About 98% of human DNA is non-coding. A good primer can be found here . This web page has an image that compares the number of base-pairs in various animal species, from 1.1 billion in Anne's humming bird, to 3.4 in humans, to 4.3 in a sea cucumber, all the way up to 8.22 in Red viscacha rat. A plant, Paris japonica, has 150 billion base-pairs, while Polychaos dubium, a freshwater amoeboid, may have 670 base-pairs, about 200 times more than huma
Post a Comment
Read more

Dogma and the Universe

October 15, 2021
This post is partly in response to a blog post on Evolution News from a couple of years ago, recently recycled here (and prompted by a recent post at the Sensuous Curmudgeon). Self-appointed spokesmen for science often use the enormous size of the cosmos, with its billions of galaxies, as a club to beat up on Christianity. They say people in the Western tradition had to wait for modern science to grasp that the universe was huge, and had to shed historic Judeo-Christian views to do so. Not true. The author, self-appointed spokesmen for ID, Mike Keas, cites an essay that CS Lewis wrote in 1943. CS Lewis is something of a hero to a lot of Christians, and it is interesting to note he utter rejected creationism! However, this essay is on another subject. Keas says: C.S. Lewis in his 1943 essay “Dogma and the Universe” demolished Nye’s way of thinking. Lewis begins with an analogy. Lewis' essay can be found here (it looks like it was scanned, and contains some errors that I will try
Post a Comment
Read more

Plant Galls And The Discovery Institute

October 14, 2021
Galls are structures on plants that benefit the parasite, but are detrimental to the plant. Here is a great paper that demolishes evolution, because how could plants possibly evolve to have structures that are detrimental to them? And here is the Discovery Institute's take on that paper. The new paper is typical of Lönnig’s writings, with an abundance of details and references. As you listen to his podcast on carnivorous plants, or read his new article on plant galls, I suggest the following exercise: Try to imagine hypothetical species that would falsify Darwin, using his own criteria, in a more spectacular way. The only problem is... plant galls are caused by the parasites , not the plants. It is the parasites that have evolved the ability to cause galls, not the plants. How Could The Author Get It Wrong? Wolf-Ekkehard Lönnig, author of the article, actually spent 25 studying plant genetics and mutations and has a Ph.D. in genetics - or so the DI assure us. His paper has "
Post a Comment
Read more

September 03, 2021
Cytochrome-c is a protein that is found in most organisms; it is involved in electron transport in mitochondria. About 70% of its 104 amino acid sequence is set in stone - if it changes, the protein does not work. A mutation that leads to such a change will lead to an organism that does not survive, will not reproduce and so the mutation is quickly lost. The other 30% does not matter so much, and a change in one position can lead to a functional protein (though I would guess it is still restricted to a subset of amino acids), and so to an organism that survives, produces and passes on the mutation. Nevertheless, such mutations are very rare events for cytochrome-c, which means the variations between species are minimal, and this gives us a great insight into how they evolved, confirming the nested hierarchy indicated by morphology and genetics. Here is a list of species (from here ) indicating the number of differences in the amino acid sequence compared to that of humans. Chimpanzee 0
Post a Comment
Read more

July 20, 2021
This is basically a post I made on CARM to an idiot who believed in both front-loading AND special creation, who uses the fact that I could not give a response about co-opting to dodge a dozen questions he could not answer. So I gave him the answer. He, of course, still could not answer the questions because... well, creationism. Because evolution is real science, there are a lot of papers on this that make interesting reading. Here is a great one from 2008. By the way, all these papers are from the last twenty years. This is a dynamic and on-going area of research. That is the nature of evolutionary science. Here is the abstract, which I am quoting to highlight that co-option was something Darwin proposed, so the idea is as old as the theory of evolution. Of course, we now have a vast amount of data that confirms it. Darwin believed that evolution generally occurred through a series of small, gradual changes. This proposal was counter-intuitive to many people because it seemed likel
Post a Comment
Read more

Evolution of the Eye 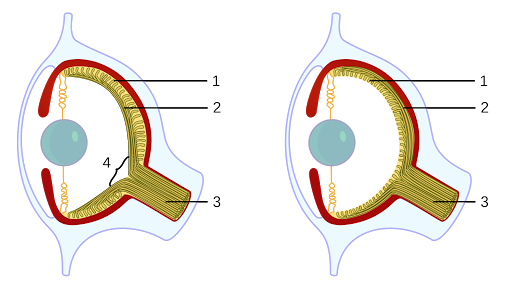 The evolution of the eye is a popular topic in the creation-evolution debate, perhaps because it is so easy for creationists to quote-mine Darwin on the subject - and credit to Answer in Genesis for acknowledging what Darwin actually said. Here is the full quote, from  The Origin of Species : To suppose that the eye with all its inimitable contrivances for adjusting the focus to different distances, for admitting different amounts of light, and for the correction of Spherical and chromatic aberration, could have been formed by natural selection, seems, I freely confess, absurd in the highest degree. When it was first said that the sun stood still and the world turned round, the common sense of mankind declared the doctrine false; but the old saying of Vox populi, vox Dei, as every philosopher knows, cannot be trusted in science. Reason tells me, that if numerous gradations from a simple and imperfect eye to one complex and perfect can be shown to exist, each grade being useful to its
Post a Comment
Read more
More posts